NEWS: Peter Arguimbau “Painter-Sailor In Search Of Ships With Sails”

For years the New England marine painter, Peter Arguimbau has spent his summer months sailing the northeastern coast in search of seascapes, classic yachts, and tall ships in his 1935 classic 28-foot catboat the “Molly Rose,” outfitted as a studio. You can readily find this painter-sailor by the large black dot on his sail. “The reason for being on a boat,” the painter-sailor explains, “is you’re living at that dramatic moment when the sun is either setting or rising when you have the most dramatic effects.”

So why the classic catboat? “It has so much character,” says Arguimbau, “It’s an historic boat and people welcome you right into the harbor. It is very large for a catboat. But that is what makes it such a stable studio on the water, tried and tested. I can go up and down the coast from Watch Hill, Rhode Island to Maine.” He adds, “A catboat is for the poor man yachtsman. The beauty of a catboat,” Arguimbau continues, “is it’s a centerboard boat with its shallow draft that allows you to get in close to the shallows of the shore. With the “Molly Rose,”you’re there with your equipment to paint the sunset and the sunrise.”

Arguimbau is after luminism, so he hugs the shore. “It’s where the water meets the land. You have the tidal marsh. You don’t know whether it’s water or land. At that moment the atmosphere is thick or humid so you get the atmospheric effects of nature.”

Arguimbau is particular about his equipment. He seeks to emulate the Old Masters, especially the Flemish painters, so he makes his own linseed oil paint as the Flemish painters did. “It’s a fast drying transparent oil medium,” he says. “The paintings dry instantly in the sun like watercolors.” And like the Flemish painters he paints on wooden panels he has made from hardwood logs on his property.

Arguimbau is a consummate painter of seascapes; but it’s those ships of sails, those classic racing yachts that the galleries want. He’s on the watch for those newly restored ships and yachts that appear every season. He’s there in Newport Harbor by the Castle Hill Light to capture the action of sails at the start of the Newport Bermuda Race. When the classic racing circuit kicks off in Maine in early August Arguimbau will rendezvous with the Wooden Boat Classic, the mecca of wooden boats. He’ll sail on to the Marblehead Classic, then to the Nantucket Opera House Race, the oldest classic in America, before sailing back to the Newport Classic Race on Labor Day weekend.

With the arrival of fall comes a different light illuminating the sails. Arguimbau, the painter-sailor makes the most of it by following the racing circuit’s final sweep to the oldest yacht clubs surrounding Long Island Sound. “It starts with Shelter Island,” says Arguimbau, “and ends at the Boat Basin in New York City.” 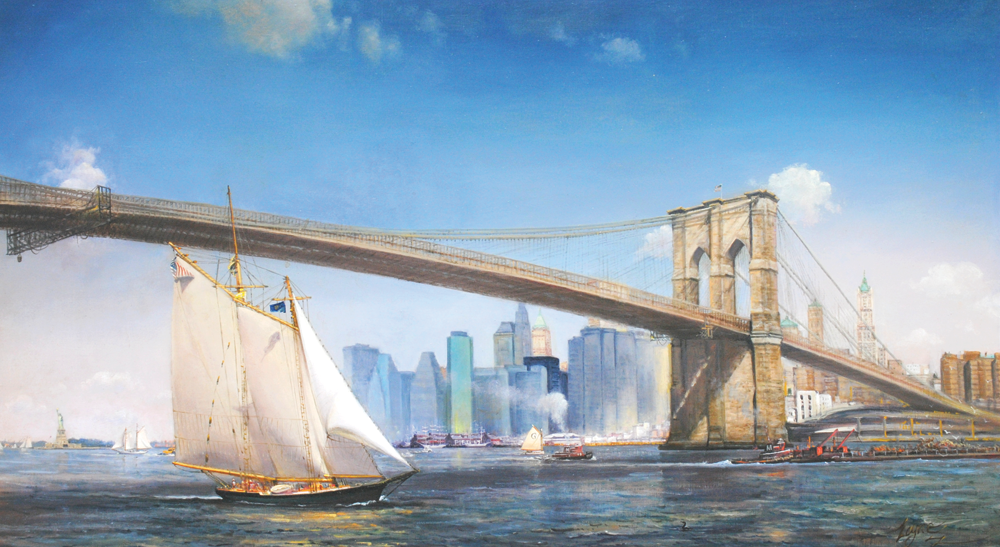 The backdrop of the Manhattan skyline is featured in some of Arguimbau’s super-sized marine paintings, like “Brooklyn Bridge.” He was there in 2000 to sail with the Tall Ship Parade from New York to Boston where he painted the “U.S. Constitution” and the “America.” When the Tall Ships sailed to Newport in 2007 for the Newport Classic Race, Arguimbau was commissioned by Admiral Thomas Weschler of the Naval War College to paint the poster painting for the event. The resulting   “Newport 2007 Tall Ships,” was auctioned off at the historic Breakers before a crowd of 800 for $25,000 dollars.

With his tall ship name recognition in Newport perhaps it’s no surprise he has a new and appropriately named Mariner Gallery in Newport in an historic building, restored with the wood workmanship he shares with son Andre. “Andre is a member of the New York Yacht Club that has a summer branch in Newport,” says Arguimbau. The gallery comes with second floor sleeping quarters, so, “it’s a great new takeoff place for painting trips. I always told Mary, my wife, the “Molly Rose”would find us a house, but she didn’t live long enough to find it,”says Arguimbau. His wife of 27 years died in 2013.

How the “Molly Rose”came into Arguimbau’s ownership has a story that includes Mary Arguimbau. There was an earlier catboat in Arguimbau’s life, an 18-foot Marshal catboat quirkily called “Mr. Magoo.” “It was my first sailboat at age 40,” he says, “and I had no clue what I was doing.”
While sailing the catboat circuit along Buzzards Bay and Cape Cod he began to fancy “this big old catboat named “Molly Rose.” But not wife Mary. She was only after the owner’s permission to name their black lab puppy Molly Rose. Still Arguimbau’s fancy lived on for the larger “Molly Rose;”and when it came up for sale, Arguimbau’s wife declared, “Not on your life are you buying a wooden catboat” -because of the maintenance. But there came a final relenting.“My wife condescended, saying it was meant to be because it was the name of our dog.”

Having a catboat sailing son led to the black dot on the “Molly Rose” sail. “You can see it from three miles away,” says father Arguimbau, “So I would know where the boat is when my son took it from the   age of 17.” From Shelter Island to Plum Gut, to Cuttyhunk, says Arguimbau, “people would call me  and tell me they saw him, and Andre would wonder, how did they know?” Arguimbau got the black  dot idea from a line of clipper ships that would sail from Liverpool to New York. “It was the Black  Ball Line that brought passengers to and from Liverpool to America from 1815 to the 1860’s,” he says.  “It was a readily identifiable sign they were arriving – their destination were the docks on the lower part  of Manhattan Island.”

Arguimbau is drawn to ships of history. When he spotted the newly restored “Charles Morgan” whaler sailing out of Mystic on route to Boston he painted her. Approached by a whale lover wanting him to paint the replica of the famous “Essex” that was sunk in 30-minutes by a whale (that inspired Herman Melville’s “Moby Dick”), he readily accepted.

“The great age of sail was 1850’s to the early 1900’s,”says Arguimbau,“when the mighty clipper ships  were breaking transatlantic and New York to San Francisco records. They were putting up more and more canvas to go faster and faster. The rigs were amazing.” With the disappearance of clipper ships this painter-sailor desired to paint his own “Clipper Ship,” in all its marine majesty from his imagination and inspiration from the works of Montague Dawson, master painter of clipper ships. It was during that great age of sail that the America’s Cup race started, says Arguimbau. He was there in Cowes, England in 2001 for the sesquicentennial America’s Cup Jubilee – on a chase boat with his panel and paint. “It was the greatest event of sail in modern times where they amassed 270 classic gaff-rigged yachts for a reenactment of the first America’s Regatta in 1851 when the winning yacht was the “America.”

For the most part Arguimbau sails alone. But one year he took aboard three fellow artists – former classmates at the Art Students League in New York. His catboat sleeps four or five.“Because of its 12-foot beam it has an immense cockpit or ‘studio’ space to paint in,” he says. Their sail trajectory took in Narragansett Sound, Saunderstown, Newport, Cuttyhunk, Martha’s Vineyard, Buzzard’s Bay, and Westport, Massachusetts. “We’d sail into the harbors to a remote spot and throw a hook , painting along the way. We’d find a quiet mooring spot, then paint the sunset, then in the morning paint the sunrise. Then sail to another destination and do the same.”

Arguimbau sees the great advantage of his sailboat studio compared to those painters of yesteryear who went in search of nature “The Hudson River School artists who went on horseback took little thumbnail boxes that opened up,” he says. “The Flemish painters didn’t have tube paints –they relied on drawings and painted everything in their studio.” The breakthrough came with the transformative arrival of tube paint. “The first School to use these paints were the Impressionists. They created the French box with a palette that had legs. That’s when they started to paint en plein air.”

For the previous 20 years Arguimbau has built up a body of work in a studio not far off where he was  raised in Scotts Cove in Darien. “I’d always gravitated to water and to boats, but it became obvious that boat people, especially yachtsmen enjoyed boating scenes, which encouraged me to learn to sail.

With Arguimbau’s embrace of his catboat, the “Molly Rose” he’s seen, “a whole generation has grown up with these boats. I’ve made a reputation of painting catboats that put my two kids through college – they’re all over the place in my paintings.” So Arguimbau and his “Molly Rose” paid homage two years ago in Mystic at the Catboat Rendezvous held to celebrate the 50th anniversary of the Catboat Association.

But if you run into a marine painting of Arguimbau’s don’t be confused by his signature of Layne. Layne is his middle name.“My dad didn’t want me to be an artist, for fear I’d starve to death. When I was 14 I was watching cowboy westerns on TV and one was called Bronco Layne, so as an act of independence I decided to sign my paintings Layne. I’ve enjoyed doing it all these years. It releases me from making my name as a brand rather than my art.”